The ThinkPad T460p provides business users with a powerful, quad-core processor in a durable, lightweight chassis.

The Lenovo ThinkPad T460 is our favorite business laptop, thanks to its long battery life, durable design and comfy keyboard, but some users may prefer a bit more power than that machine offers. Lenovo’s $935 ThinkPad T460p ($1,223 as tested) has similar features and design to the T460, but boasts a quad-core CPU and optional Nvidia graphics. These will help you do more-demanding tasks like video editing or crunching giant spreadsheets. However, in order to get the added performance of the T460p, you’ll have to pay a higher price and settle for shorter battery life.

With very few exceptions, Lenovo’s designs don’t change much from device to device, and that trend continues with the T460p. Its plastic lid and deck, and magnesium base are in Lenovo’s iconic black. The lid is stamped with Lenovo’s logo and a ThinkPad emblem. Unfolding the laptop reveals the 14-inch and 1080p screen, island-style keyboard, cherry-red TrackPoint pointing stick, and another ThinkPad emblem stamped onto the deck. 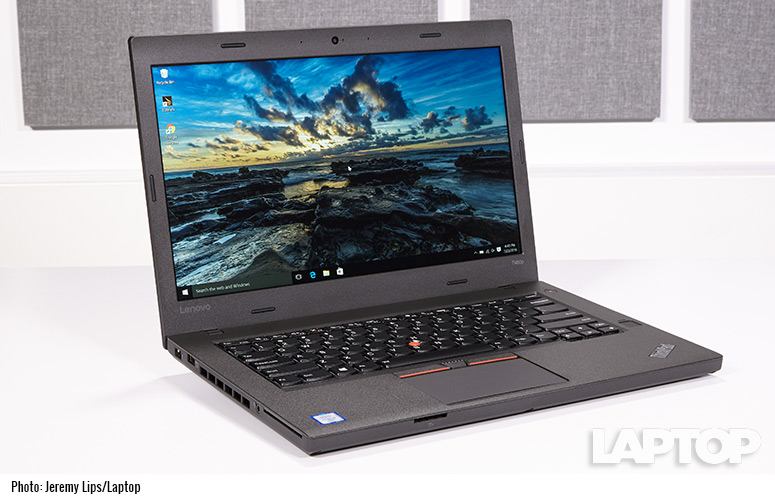 The T460p has more than enough ports for peripherals and external monitors. On the left, you’ll find a USB 3.0 port, headphone jack and smart-card reader, while the right is home to a SIM card slot, two more USB 3.0 ports, an Ethernet jack, a mini DisplayPort, HDMI output and a lock slot. 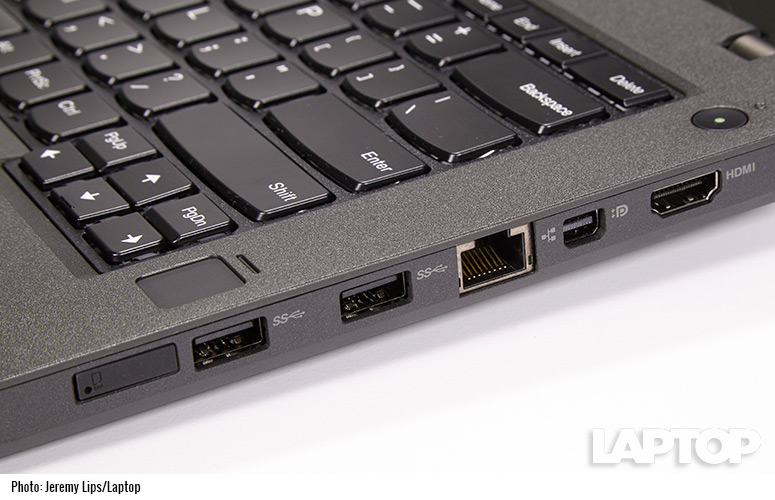 An SD card slot is located under the palm rest, and a dock connector can be found on the bottom of the laptop. Unfortunately for users working with multimedia files, there’s no Thunderbolt 3 port for connecting to superfast hard drives and dual 4K monitors.

The T460p is built to pass MIL-SPEC 810G tests for extreme shocks, vibrations and temperatures, so it can take a few licks while you’re on that cross-country business trip. Lenovo also runs all ThinkPads through a bevy of internal bump and drop tests. 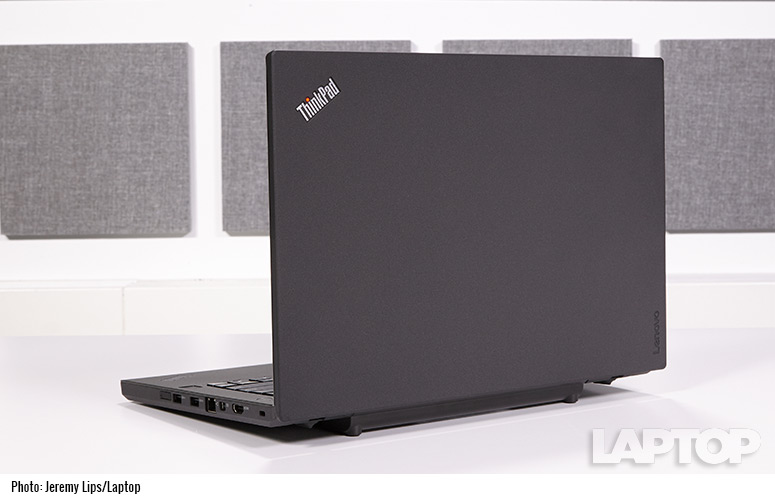 The notebook has features to protect your data, too. It uses TPM to secure sensitive information and biometric data, and vPro for remote management by IT departments. A single-press fingerprint reader and optional smart-card reader are both optional and will make the process of logging in to the computer more secure. 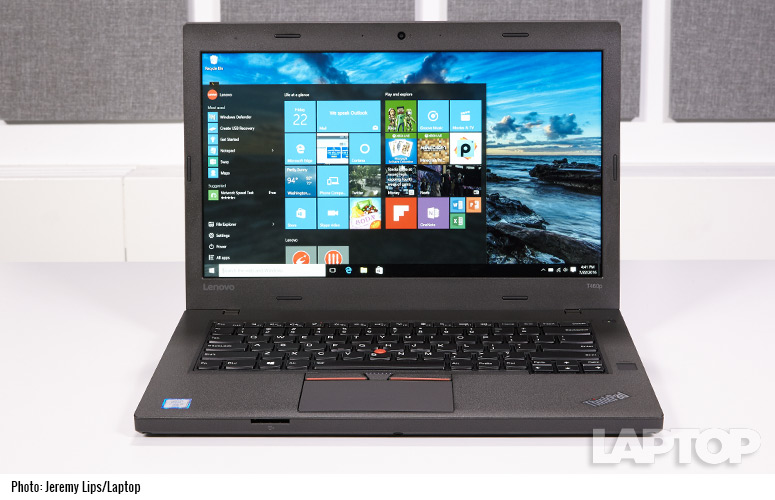 The T460p’s panel produces a measly 62 percent of the sRGB color gamut, which is lower than the 80 percent thin-and-light average and the showings by all of the notebook’s competitors. The vanilla T460 reproduced 67 percent, while the EliteBook 745 and Latitude E5470 were more vivid, at 84 percent and an excellent 113 percent, respectively.

The keyboard on the ThinkPad T460p provides a responsive typing experience that is comfortable, with one bizarre exception. While the majority of the keys had a deep 1.9mm of vertical travel, the G, H and B keys (those around the TrackPoint) had 1.5mm of travel. You could tell that those keys were shorter just by looking at them, and I felt it while I typed. This is something I eventually got used to, and I suspect that we may have had a defective unit, but it’s also possible that there are wider quality-control issues. 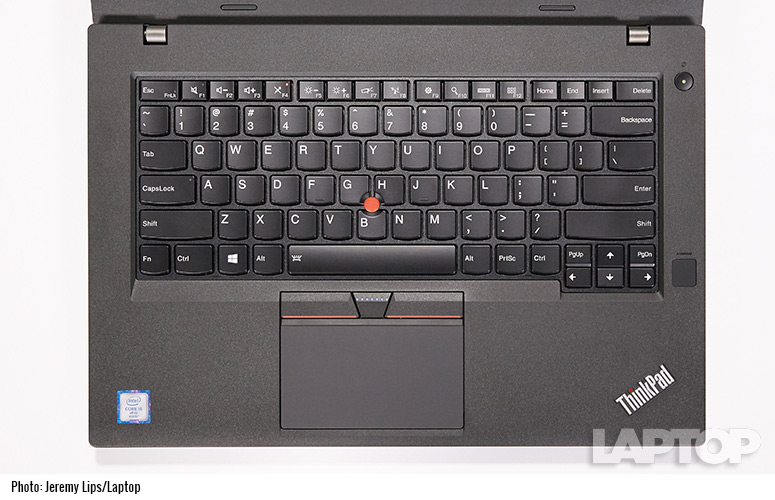 The keys require 67 grams of force to press — 55 to 60 grams is typical — and I liked how responsive they were. Despite the three shorter keys, I was able to type 106 words per minute, which is average for me, with my standard 2 percent error rate.

The 3.9 x 2.2 touchpad was responsive while I was navigating and trying out Windows 10’s gestures.

The TrackPoint is more than an iconic part of Lenovo’s design; it’s also extremely accurate and lets power users navigate without moving their fingers from the keyboard’s home row.

The speakers on the T460p are nice and loud but don’t offered balanced sound. When I listened to Bruno Mars’ “Liquor Store Blues,” the vocals and rhythm guitar were nice and clear, but both the percussion and the bass were weak. On the bright side, the laptop’s speakers filled our midsize meeting room with sound long before I turned the volume up to its max.

The ThinkPad T460p that we reviewed was armed with a 2.6-GHz Intel Core i5-6440 CPU, 8GB of RAM and a 256GB SSD. Those strong specs provided more than enough performance for some serious multitasking. I had 20 tabs open in Chrome, one of which was streaming 1080p video from YouTube, and I noticed no lag at all.

While the T460p’s quad-core processor gives the machine a boost in performance, the laptop’s integrated Intel HD Graphics 530 GPU isn’t powerful enough for serious gaming titles like Tom Clancy’s The Division and Metro: Last Light. Browser games like Words with Friends will run fine, and you’ll likely get a boost when multitasking.

Depending on which battery option you get with the T460p, it will either provide an entire workday of portable computing or will keep you chained to an outlet with your charger. The slim, three-cell battery lasted only 3:18 on the Laptop Mag Battery Test, which involves continuously surfing the web over Wi-Fi. That’s far shorter than the thin-and-light average of 8:11. When we ran the test again with an extended, six-cell, 72Wh battery, the notebook endured for 9:57. There’s also a six-cell, 48Wh battery that’s the same weight and roughly the same size as the 72Whr component, but it’s $10 cheaper and totally not worth it.

Like the T460, the T460p uses Lenovo’s Power Bridge technology, which pairs the three- or six-cell removable battery with a three-cell, internal battery. So, if you bring an extra battery with you, you can swap it in, without having to power down the laptop.

The 720p webcam on the T460p takes serviceable photos that are sharp but bland. I could make out lots of details, like the seams on my shirt, individual hairs on my head and the spaces between a stack of folders behind me. 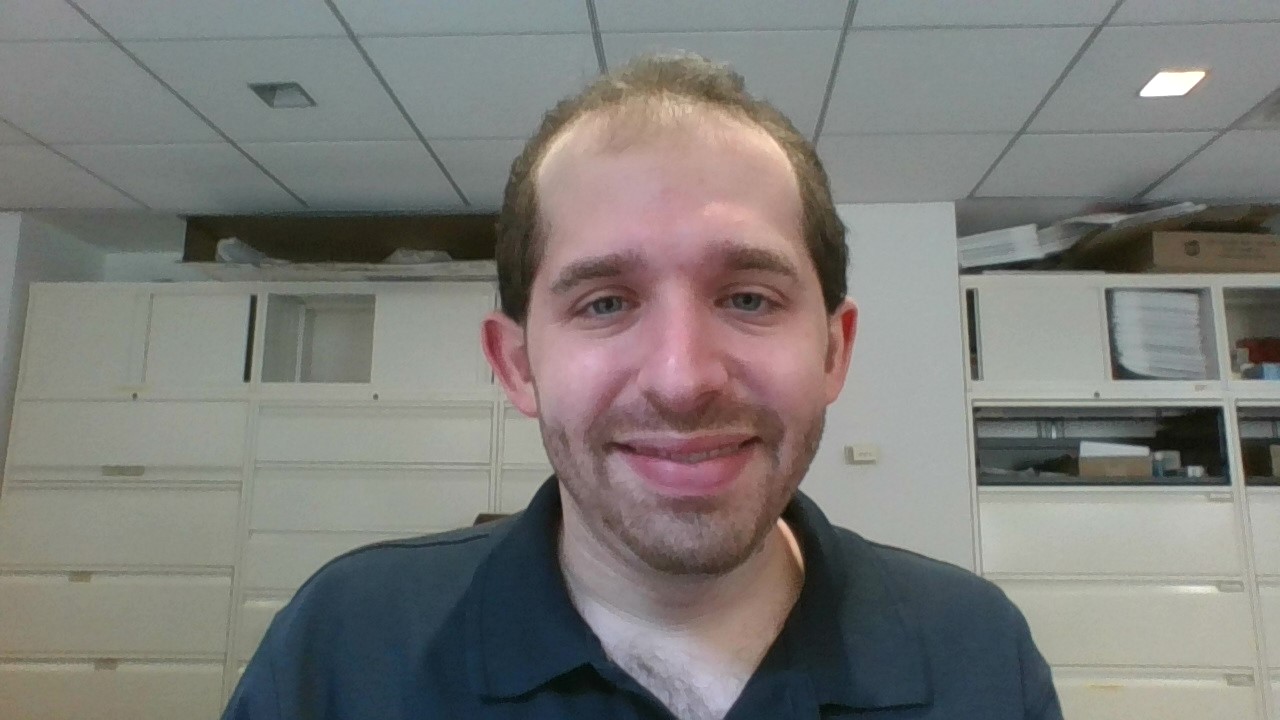 The colors were pallid, though, with my navy blue shirt appearing grayish and my bright blue eyes looking dull.

You don’t have to worry about the T460p overheating; it was nice and cool during our heat test. After we streamed 15 minutes of HD video from Hulu, the bottom of the laptop reached 91 degrees Fahrenheit and the keyboard and touchpad measured 86.5 and 85.5 degrees, respectively. All of those temperatures are below our 95-degree comfort threshold.

The T460p comes with some useful utilities preinstalled but also has some bloatware common to Windows laptops. The junk includes Candy Crush Soda Saga, Flipboard and Twitter, as well as a constant link to download PicsArt Photo Studio in the Start menu.

Lenovo sells the T460p with a one-year depot warranty, under which the company pays for return shipping. You can also purchase an extended warranty, which increases the term up to five years, or add additional services such as on-site service or accidental damage protection. See how Lenovo did in our Tech Support Showdown and Best and Worst Brands rankings.

The Lenovo ThinkPad T460p is one of the best multitasking laptops I’ve tested in a long time, thanks to its quad-core CPU, and it doesn’t hurt that the battery will last an entire workday. But that power may be overkill for most mainstream business users.

The original T460 (starting at $809) provides a similar look, the same MIL-SPEC 810G-tested durability and even longer battery life while using a dual-core processor. If you’re looking for a non-Lenovo option, the Dell Latitude E5470 (starting at $779) is a fast performer with a far better display but much less battery life.

However, for those who love the T460 and wish it had just a little more oomph for tons of browser tabs, extremely demanding projects or video editing, the T460p is worth it.