(Kitco News) – One hedge fund manager, who is heading for his second consecutive yearly loss, has now put nearly all his eggs in the same basket – betting almost entirely on gold.

British billionaire Crispin Odey, whose fund is down nearly 30% year-to-date and down about 4.1% on the month, has managed to garner 2.2% returns for his shareholders thanks to the yellow metal.

And, he’s going to hold onto his winning bet.

Gold, which Odey calls the “original” currency, has strategically made it to the top of his list with the firm’s latest financials showing that over 86% of its assets under management lie in gold futures. 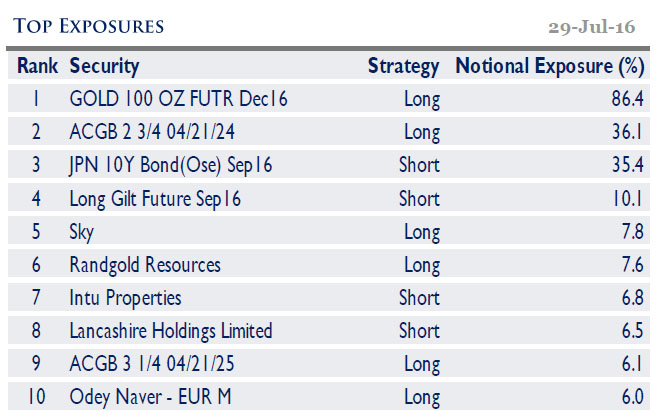 Odey said he is ignoring the noise and thinks there still is a strong fundamental case for gold.

“Today there are around 300,000 tons of gold extant and each year around 2,700 tons are mined, or less than 1% of the stock of gold,” he noted in his latest investor letter.

“There are some signs of exhaustion in the demand for gold and silver at present,” he said, attributing it mostly to the forecast-beating July U.S. jobs data that shifted Fed tightening expectations.

However, he is not convinced.

“All the services data out of the USA pointed to a weaker number….With capital spending following profits downwards and the world economy continuing to be weak, only consumer spending and bank consumer credit lending kept things going.”

Gold has mostly traded in a range since the release of the strong U.S. employment data in July, but has managed to hold onto Brexit gains. December Comex gold futures last traded up $5.10 at $1,352.60 an ounce.

Odey remains bullish on the metal, especially given the current negative-yielding environment and continued stimulus by central banks that he says will eventually bring about inflation, which would bode well for the metal.

“They [central bankers] are, along with all of us, hoping that globalization, bringing competition to bear across the world continues to overcome the political reaction to the pain [stimulus] has caused. If it fails, and it looks like it is failing, then Brexit and Trump will bring back inflation like the wind,” he said.

“In a world where $13 trillion of bonds are negative yielding, where $4 trillion of investments are in ETFs, is it wise that only $1.5 trillion of savings are invested to protect investors against a change in the weather?” he questioned.

The billionaire hedge fund manager even made homage to the U.S. gold standard and noted that current gold prices do not properly reflect the domestic, and global, money supply.

“In those days, the U.S. gold reserves were only valued at $35 per ounce and still represented 26% of outstanding dollars. Today at $1,360 per ounce, reserves represent a measly 1.5%,” he said.

With the world’s gross national product at $75 trillion and the world money supply at around $83 trillion, which is 10 times the level of the start of the millennium, Odey argued that gold prices should move much higher.